"I would not get along well with this robot because it eats my ice cream!" - Ábel (youngest member of the Jury ;)

This time we have to put aside our utilitarian thinking we have been all socialised to and resonate for the useless, hopeless, and stupid. The Bacarobo is the competition and show where the stupid robots are showcased. 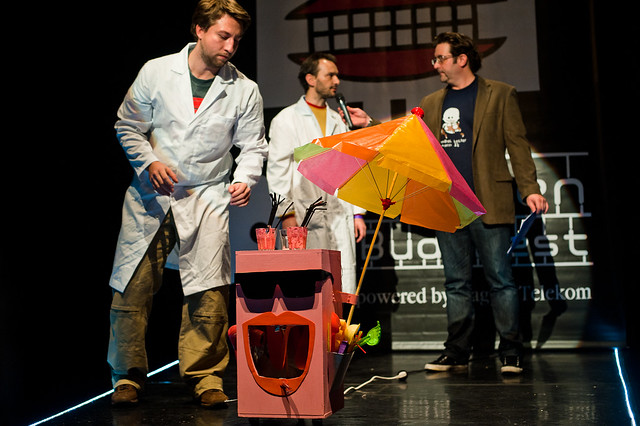 The idea came from kitchen robots and vending machines. Usually they substitutes human labor and make life more convenient. Other times they make us angry or disappointed when they stop function properly.

We wanted to capture the awkward mixture of frustration and weird urge for a painful grin when these robot`s malfunction creates complete mess.

You can put an ice lolly into the holder of the machine, then switching on the robot it will immediately start to lick the lolly. Using a prepared hair-dryer to heat and several rotating plastic tongues the robot makes sure that the ice cream will melt in 5 minutes and will run into the glass through the spout. The robot also plays the main theme of "Love is a many splendored thing" to entertain you while waiting.

After the process has completed you can optionally drink the melt cream from the glass.

Bacarobo was fist organized in Tokyo by the founder of the Japanese Maywa Denki group, Tosa Nobumichi, and since then the competition of stupid robots has been organized year after year.

Bacarobo Europe is the joint event of Kitchen Budapest and the Trafó House of Contemporary Arts.